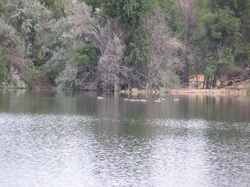 This is the W-Drain project !
The North  Side  Canal Company has a drain they call the "W" and it carries excess  irrigation  water from the last field on their system through the Malad Gorge  State Park  where the drain ends in a waterfall to the bottom of the Malad Gorge
where the  water entered the Malad River. From there, it is just a short,  straight  shot into the Snake River. The W Drain delivered the water just this  way for  many years.

There was just one problem. The water  wasn't clean.  The water was loaded with agricultural sediments and phosphates  and nitrates and  it was falling almost directly into the Snake River. The Snake  River has a  sediment load that needs to be decreased, not increased. In short,
the water  from the W Drain was not helping.

With NRCS and other partners, the "What if..." talks  began and the result of  those talks and actions are now called the W Drain  Project. The water is now forms a pond in the Malad Gorge Park and will soon  become a wetland and recreation area, adding to the Park's appeal. The pond will  regulate the flow of water as it enters -  not  a waterfall of dirty water -   but a 6,000 foot
pipe that goes straight down the canyon rim and delivers it  to three irrigators below the rim. In return, the three irrigators below the rim  will no longer be pumping clean water out of the ground to irrigate their crops,  but will be land applying water that then will slowly percolate through the soil  profile before it finally reaches its destination in a much cleaner  state.

The benefits are  spectacular:
1. Much cleaner water enters the Snake River from the once dirty W drain.
2. Less drinking water quality water  is pumped from the ground for irrigation
3. Less electricity is used to irrigate three farms because the pipe is naturally pressurized from
the fall from the rim.
4. The Malad Gorge State Park gets a  water feature for park visitors.

The Gooding SCD would like to  thank Steve Thompson, District Conservationist, for his diligence, perseverance and dedication to this project.  The arial shots were taken by Steve  as he flew over the project area, both before the pond filled and after.
In a  few short years, vegetation will change the entire look of the pond, and
we will  post that photo too.